How can we embody a posthumanist perspective to cultivate care as a liberating force against post-colonialism? Can technology be re-appropriated from corporations to support this embodiment or aid in proliferation of care?

Embodying posthumanist perspectives can act as a liberating tool against the post-colonial effects on humans, non-human beings, spirituality, sexuality and love.  Technology can be a powerful tool to aid…… (?)

I’m still trying to narrow down the technological aspect of the hypothesis because, it’s vast. 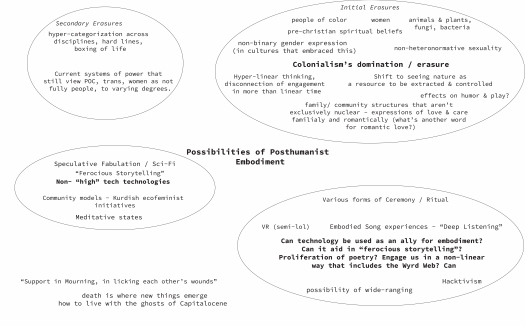 In Anna Tsing’s “Unruly Edges: Mushrooms as Companion Species”, she claims “Domination, domestication, and love are deeply entangled”. In plantation system she references the absence of human to human and human to interspecies love, ” …they invest everything in the superabundance of a single crop.  But one ingredient is missing: They remove the love.  Instead of the romance connecting people, plants, and places, European planters introduced cultivation through coercion.[xxvi]   The plants were exotics; the labor was forced through slavery, indenture, and conquest.  Only through extreme order and control could anything flourish in this way; but with hierarchy and managed antagonism in place, enormous profits (and complementary poverties) could be produced.  Because plantations have shaped how contemporary agribusiness is organized, we tend to think of such arrangements as the only way to grow crops.  But this arrangement had to be naturalized until we learned to take the alienation of people from their crops for granted.”

And on patriarchal family unit and love politics:

“The boundaries of the home became the expected boundaries of love.  With the fetishization of the home as a space of purity and interdependence, extra-domestic intimacies, whether within or between species, seemed archaic fantasies (the community, the small farmer) or passing affairs (feminism, animal rights).  Outside the home, the domain of economic rationality and conflicting individual interests reigned. Moreover, this kind of family fetish reappeared in mid-20th century U.S. mass culture—and once again in our times now—as the United States assumed a global leadership that allowed it to draw from older regimes of colonial culture.   Here love is just not expected outside family walls. Within the family, other species can be accepted; pets are models for family devotion. But the model of the loving and beloved pet does not spread love; it holds it tight inside the family.

U.S. publics learn to imagine themselves as compassionate, moral people because they love their children and their pets.  They learn that this love makes them “good people”—unlike terrorists, who only hate. They imagine that this love equips them to make decisions for the whole world; it creates a moral hierarchy in which American “goodness” is qualification for global leadership. Other peoples, and other species, are judged by their ability to live up to U.S. standards of domestic intimacy.  If they are properly engaged with family love, they may deserve to live. Others risk becoming “collateral damage” in U.S. projects to improve the world; to eliminate them may be unfortunate but not “inhumane.” Under this tutelage, our species being is realigned to stop Others at home’s door.” 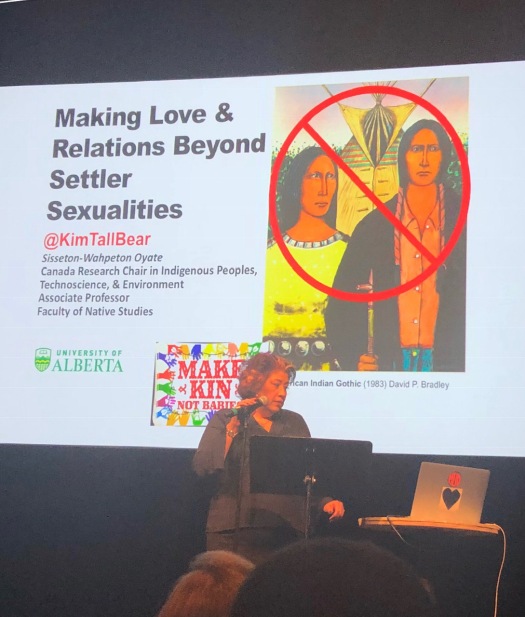 There’s a way in which ideas of “love” are seen as non-intellectual and I really like when I see things that are deemed “non-academic” in academia – since that qualification is directly linked to Eurocentric colonial mindset. Which is also why I want to include magic and spirituality into my exploration — and by not including aspects of it, I’d be complicit in erasure – since I’m approaching this topic broadly.

A question within this that keeps popping up is “what are the non-linear possibilities of tech? vague but persistent – the closest thing I’ve found to addressing this, in the way I’m imagining it, is Ricardo Dominguez’ of The Electronic Disturbance Theater, below:

“The Electronic Disturbance Theater has referred to the Transborder Immigrant Tool (TBT) as an example of Science of the Oppressed, an approach that is informed by forms of knowledge production that are marginalized by the rational focus of digital. [10] The fundamental operations of digital technology, AND, OR and NOT, are derived from George Boole’s development of Boolean logic which was first described in the pamphlet Mathematical Analysis of Logic published in 1847. [11] While the Boolean logic that is the basis of digital technology is based in western systems of reason, Science of the Oppressed includes concepts such as Mayan Technology, proposed by Ricardo Dominguez to signify non-linear causalities and technologies such as the stick the little mayan boy waves at the Mexican army helicopter to make it go away.”

Dr. Rupa Marya’s map of Colonization omits spirituality, but she references it in another place below. This idea I’ve been thinking a lot about lately, that somehow people don’t realize all cultures have an indigenous past and the systematic erasure of European pre-Christian spirituality – which, accompanied by whiteness’s default to appropriation, is another reason why white people have engaged in other culture’s spiritual praxis in ways that are extractive – in part because they are so unaware of their own spiritual history. (insert the book on witches here) 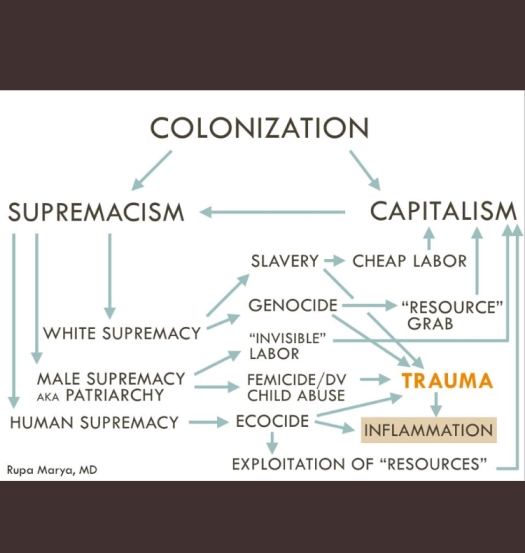 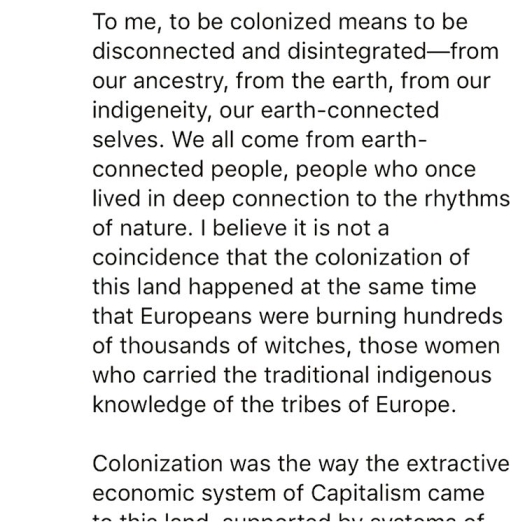 How can Reconnecting to “magic” that was systematically suppressed during Christian colonialism?

How can we connect to magic / spirituality and embody a posthumanist perspective to cultivate care as a liberating force against post-colonialism?

Healing by reclaiming stories and making new ones

The element of death in newness

Ghosts of the Capitalocene

How we live with ghosts

What kind of communities could emerge post capitalist ruin

What kind of communities can exist now

Should Utopía be a goal? Are idealist goals too binary?

Governance of bodies and borders specifically in posthumanism

When we are faced with demise – where can we find beauty?