Kimberly Lin and I decided to expand on an earlier project SOMATAROT for the final, making it an immersive installation.

Inside the SOMATAROT experience, you process your reading through the embodied oracle dance guided by mysterious holographic sybils. 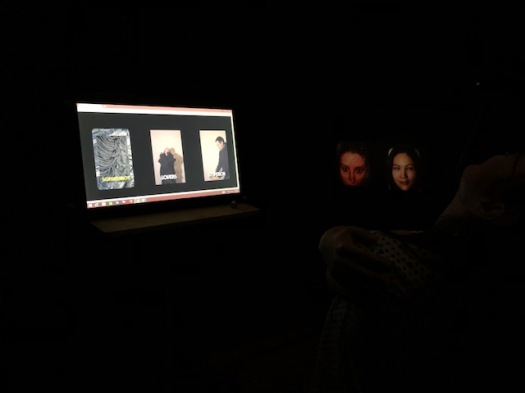 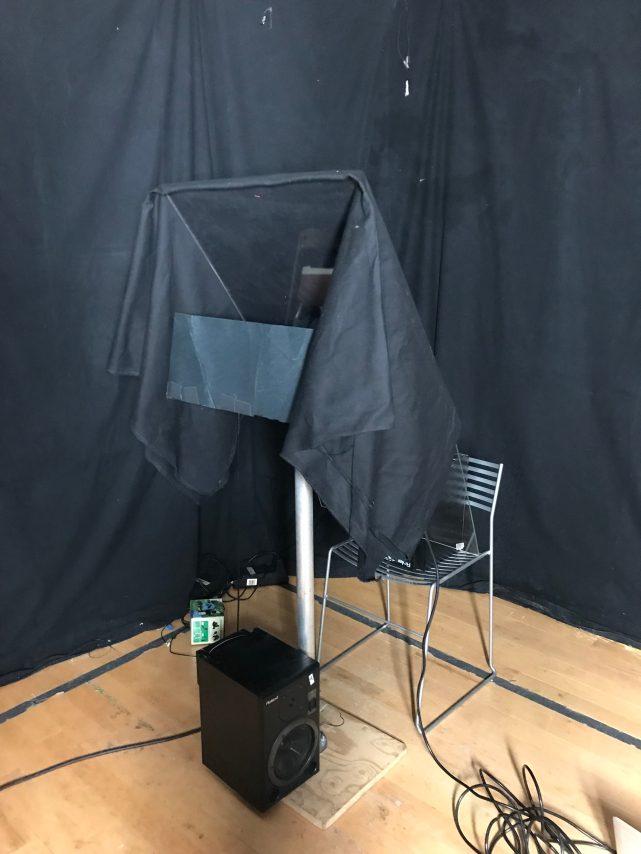 You will be handed a ball chime and instructed to enter the room. You will think of your question and once completed, you shake the ball and the Sybil’s begin their welcome. When they have finished, you place the ball on the bed that activates the cards. For the winter show we’ve created a pcomp element with a pressure sensor that triggers the read in p5 via the chime ball.

Kimberley Lin and I incorporated Allison’s Middle square method n=6 (http://alpha.editor.p5js.org/allison.parrish/sketches/BygxbtZjz) to our Who’s Your Baby meditation. We created a variable “thing” that is 5 * myRandom and applied it to the video and sound.

Expanding on “T-eye the Knot” project, Kim and I have added a feature where you receive an audio message from your future baby. You do this by choosing an MRI of a fruit that speaks most to you. Last meditation we used a natural phenomenon to predict the user’s wedding song, this week, along the line of the oracle board, we give more agency to the user via a personal selection of writing the name of their future child. The overall form is still taking shape but we see it as an interactive installation / performance.

This project is exploring different ideas of spirituality under capitalism, spiritual product-ing, modern family anxieties and how tech is increasingly mirroring & enveloping us.  Two references that speak to me in the overall theme of this project are:

This meme that I think is pro-magic but is maybe tongue in cheek saying magic/spirituality is impossible under capitalism? Or maybe they believe it’s not:

And this article by Anna Tsing at UC Santa Cruz “Unruly Edges: Mushrooms as Companion Species”, basically argues that Fungus is the enemy of colonialism by way of ruining new farming methods of larger mono crops. She argues, this type of farming, expansion and oppressing created a new type of family structure developed in colonies in the Americas that were hyper-nuclear focused.

“Domination, domestication, and love are deeply entangled.  Home is where dependencies within and among species reach their most stifling.  For all its hyped pleasure, perhaps this is not the best idea for multi-species life on earth. Consider, instead, the bounteous diversity of roadside margins.  Consider mushrooms.”

The messages from your future baby are playing with the idea that some believe that we are light beings looking for different types of experiences on earth.  Susan Neiman’s first chapter of “Why Grow Up? Subversive Thoughts for an Infantile Age” comes up with the ideas of shifting and different roles of children.

The user sees the 6 MRI gifs of fruits & vegetables and type in the name of their future baby, according to the 1st letter of the name it will select one of the 6 with a verbal message from the future baby.

view raw
who's your baby
hosted with ❤ by GitHub

For the 3rd meditation I worked with Kim Lin to make a matrimonial divination firm  “T-eye the Knot”, that provides services based on your interaction with live streaming jellyfish from Monterrey Bay Aquarium.  One feature is predicting your wedding song – one of the eery tracks NASA has made from each planet’s radio transmissions.

The participant will be wearing Pupil Labs glasses watching the live stream. According to where their eyes go the most, one of the planet songs will be selected.

We decided to go with Pupil Labs instead of doing eye tracking in p5 or another program for the physicality of it, but haven’t figured out how to work with the data yet.  In the meantime, here is the concept video:

Kimberly Lin and I have been developing a deck that interprets each card with a movement. “Soma” comes from the idea of Somatic  therapy where our experiences, emotions and trauma are not only stored in our mind but throughout our body. This week we added our interpretations for the 6 cards we have recorded so far. We referenced these two books (will add author names and titles here). We recorded it through a vocal processor I have to give it a touch of cyborg & swimming in the cosmos feeling.

We wanted the videos to loop but the audio to repeat only once when the card was selected while maintaining the random function. This was executed in P5 with help from Leon.

We are still developing the concept of how we want people to engage with it and am thinking of it more as an installation with life size videos and and a physical component as opposed to a website.